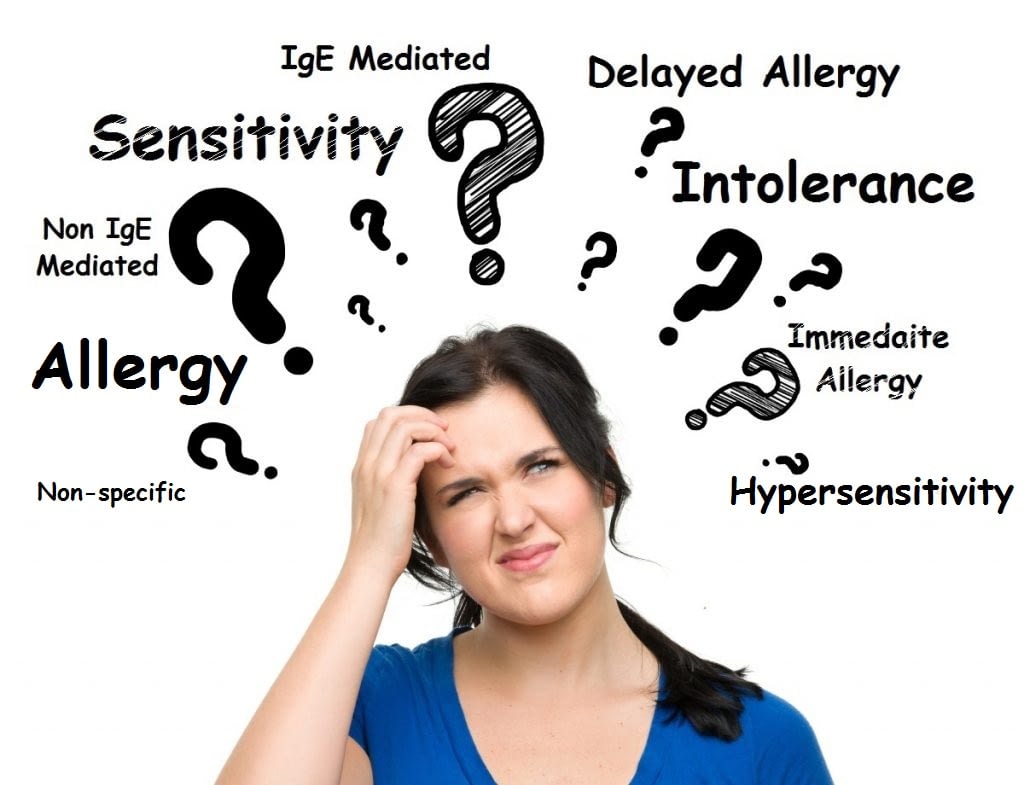 Difference between allergy, sensitivity and intolerance

At this point, in order to better clarify the difference between each category scientifically and also to avoid further confusion among general perception about each category, the adverse reactions to food or ingestible ingredients has been categorised in to three main groups as food allergy, food sensitivity and food intolerance. As the concept of food allergy among the general population and even the healthcare professionals often has been regarded as type I food allergy or IgE mediated food allergy, here we try to maintain the same concept and use the term "Sensitivity" for describing other immune mediated food allergies. Food sensitivity and food intolerance are also divided into more detailed categories according to their mechanisms of reaction. 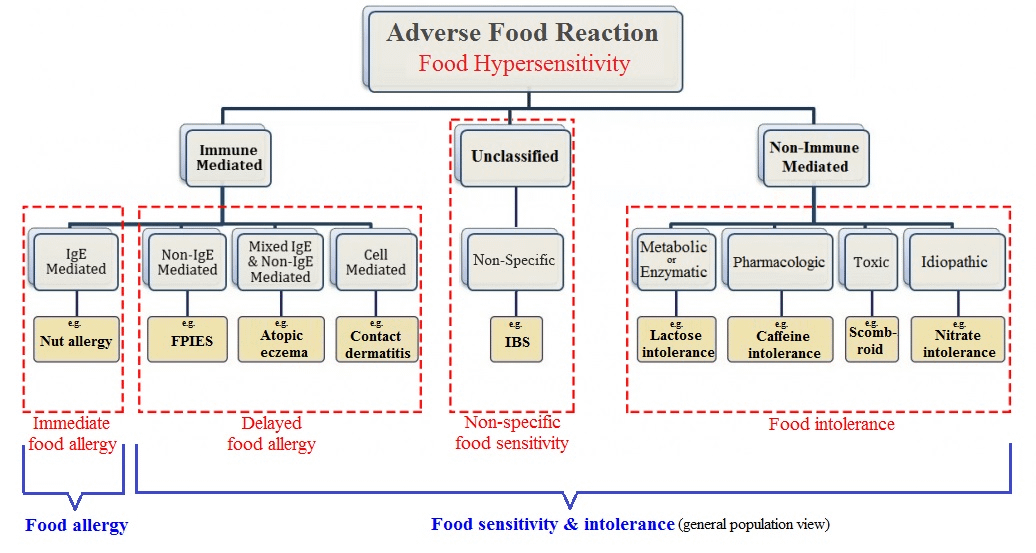 The term "Food Hypersensitivity" refers to all types of unusual clinical overreactions following ingestion of food, beverages and food additives. It is used broadly to describe any food allergy (immediate or delayed), food intolerance (enzymatic/metabolic, pharmacologic, toxic and undefined) and unspecified food reactions. Symptoms of food hypersensitivity are many and range from mild to life threatening. They also could manifest in only one part or different parts of the body individually or simultaneously.

Food allergy, (also know as true food allergy, type I allergy or IgE mediated food allergy) is when the immune system reacts unusually to certain foods. Symptoms of food allergy can vary from mild to severe and sometimes life threatening. The symptoms normally appear within 2-15 minutes of ingesting the food and may affect one part or different areas of the body at the same time. Often a tiny amount of the allergy-causing food can trigger signs and symptoms of food allergy such as:

The most common foods causing allergy are milk, egg, nuts, peanuts, fish and shellfish. Food allergy is often diagnosed by skin prick test or food-specific IgE antibody test in conjunction with clinical history. Occasionally, food challenge test is used to confirm the result of skin prick test or blood test. Some people may outgrow their food allergies (especially younger children), while those with severe reactions likely to retain it for life.

Unclassified food reaction is relatively a new concept in adverse food reactions that hardly has been discussed in any scientific paper or session. It appears that in some people presence or severity of certain health conditions are somehow connected to the ingestion of certain foods. The best examples to describe the nonspecific food reaction is among patients with irritable bowel syndrome . It is evident that not all patients with IBS may related presence or severity of their abdominal symptoms to the type of the food they consume, yet many believe that certain food trigger or worsen their IBS symptoms significantly. The mechanism of IBS remain uncertain, however emerging evidence is indicating a role for immune system in the pathophysiology of the disorder. Similarly, it is not yet clear through which mechanism certain foods trigger or exacerbate IBS syndrome in some patients. In addition, a series of newly conducted research show that elimination of certain foods lead to significant reduction of certain symptoms of inflammatory bowel disease and incorporation of the same foods triggers the symptoms. It is not yet known if the mechanism involved in the exacerbation of the symptoms is immune mediated, non-immune mediated or a combination of both.

Another example of non-specific adverse food reaction could be seen in people who experience gastrointestinal symptoms such as vomiting, abdominal cramping and diarrhea 30 minutes to several hours after ingesting seafood, particularly shrimp, shellfish and prawn. In fact, about a quarter of people who react to seafood may only experience gastrointestinal symptoms without other classic allergy symptoms such as hives (urticaria), angioedema (swelling), rash, itchy skin, runny nose, coughing, difficulty breathing, asthma and anaphylactic shock . Among these individuals majority have delayed digestive symptoms in the absence of IgE sensitization, which means blood specific IgE test and skin prick test doesn't provide positive result. The symptoms in these people are similar to infants and young children with food protein induced enterocolitis syndrome (FPIES), however the main differences between these two conditions rely on the age and resolution of the adverse reaction by age. FPIES is predominantly seen in infants and young children and the reaction usually disappears as the child grows and reaches age 2-3, nonetheless unspecified digestive reaction to seafood in the absence of IgE sensitization typically beings at adulthood and there is no evidence to suggest that the condition resolves with time and age.